Just a quick post (yes, I know I still owe you a PART 2 for the accumulating data post) ..

I am dealing with a string which has an arbitrary number of words in it. Each word is separated by a space. I want to get the last word. (ahem!)

I was not aware of this, nor do I see it in the documentation, but by feeding -1 as the index to subField(text, delimiter, index) we get the last subField.

Using this in a production code I would probably play it safe by wrapping a trim() function around my text string in case there are trailing spaces:

It’s quite possible everyone already knows about this and I didn’t get “the memo” … but just in case you find it useful – have fun!

(uhhh… and I’ll go ahead and make sure you get another copy of that memo, umm-kayyyy?)

Just an update — not surprisingly, this technique also works with findOneOf(..). That is, if you supply -1 as the index to findOneOf(text, delimiter, index) it will return the position of the last instance of the delimiter. Some technical considerations with my hosting has prompted me to rebuild this blog. Rather than doing a full backup & restore of the database, I’m simply going to recreate the prior posts.

Take your QlikView skills to the next level at the 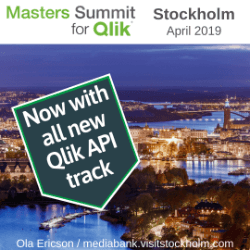 "This has been a fantastic experience and the learning opportunities were enormous. Of all the training and conferences I attended for QlikView this has been above and beyond the best one to date."


"When you finish the developer course you think you know it all, but when you come to this Summit you realize that you know nothing. It was much more than I expected."